The SWIMTAG Team will be exhibiting at Elevate in the Excel London on the 9th and 10th of May 2018. You can find us at stand A07 on the right hand side of the event hall. We will be presenting our latest web updates and hardware. Existing clients are invited to book one-on-one training session slots with our team by emailing Denne e-postadressen er beskyttet mot programmer som samler e-postadresser. Du må aktivere javaskript for å kunne se den.. We look forward to seeing you there! Further details and registration is available on the elevate website: https://www.elevatearena.com

TMActive pool users in Kent have been enjoying a friendly inter-pool battle, thanks to new features developed by SWIMTAG.

The SWIMTAG challenge features have been enhanced to make it possible for teams across multiple sites, to compete in battles, with all data being collated by the cloud based SWIMTAG system.

Operators and users are given real time access to battle progress via the SWIMTAG website, helping individuals maintain motivation as they contribute to their team’s total distance each time they put on the SWIMTAG wristband and enter the pool. Battles pitch teams against each other in events such as the 104km ‘Niagara River Swim or 78km ‘Panama Canal’. New battles will be added at regular intervals to ensure regular users remain engaged.

Kieran Sloyan, MD at 222 Sports, developers of SWIMTAG, says: “The benefits of regular swimming are well documented but the challenge operators face is keeping swimmers motivated and engaged. Lane swimming in its purest form can be a lonely, uninspiring activity. We have developed these challenge features to give people more of a reason to get in the pool, return to the pool and clock up some decent distances.

“SWIMTAG has always offered individual challenges but these new features focus more on enabling teams to compete against each other both at a single site or across multiple sites. This creates a real buzz and gives operators an opportunity to build more of a social community around the pool in a way that hasn’t really been possible in the past.”

TM Active has been amongst the first operators to run an inter-pool battle. Two teams of regular pool users, one at the Larkfield Leisure Centre and one at the Tonbridge Swimming Pool, battled it out to become the first to complete the Niagara River Swim. Team Larkfield was the first to cross the line, clocking up the full combined distance of 104km in 21 days.

Martin Guyton, CEO at TM Active, says: “The battle has become a talking point amongst those competing. The battle also attracted a wide variety of people. Competitor ages ranged from 20 to 61 with a 55 per cent female to 45 per cent male split.

“Over the last decade, gyms have embraced technology in a continuing bid to engage and motivate members through the introduction of entertainment and gamification features. SWIMTAG now enables us to bring similar technology to the pool.

“For the first time, through the implementation of easy to use, digital technology, we can enable swimmers to engage with other swimmers and work together towards a mutual goal. The battle only took a few minutes to set up and once this was done the rest took care of itself, automatically updating team progress from data collected on the swimmers SWIMTAG wristbands. SWIMTAG has already had a positive effect on our swim retention. These new features enhance this and I am looking forward to many more battles ahead!”

All pools offering SWIMTAG are now able to take advantage of these new features which launched in January 2018.

We’re pleased to announce an exciting development in the SWIMTAG Challenge Feature.

As anyone who is familiar with SWIMTAG will know, users have been able to use our Challenge feature to virtually swim iconic routes, such as the English Channel or Strait of Gibraltar in the comfort of their own pool, with SWIMTAG plotting their progress on a virtual map.

Pools have also been able to set up Featured Challenges, inviting all SWIMTAG users to swim the same route at the same time, sometimes as part of a charity swim but often just for fun and we can even plot customised routes for pools who wish to virtually swim a local route.

We’ve now developed the feature even further, so challenges can be completed as a team and teams can even compete against each other to be the first to finish, so you could have Staff v Members, Swim Club v Triathlon Club, or you can just set up teams and have people choose based on their favourite colour!

And the teams don’t even have to be at the same pool. The “Pool Battle” feature means that sites with more than one pool can set up a race between the two centres and have them compete to be the first to finish.

Because the challenges will be easier to complete as part of a team, we’re adding lots more longer routes, such as the Panama Canal (78km) and the Niagara River (108km) with more to follow soon.

Existing pools who would like to set up the new challenge options are welcome to contact us for help.

SWIMTAG will be returning to Active Net in 2018 for our second year. The two day networking event takes place at Eastwood Hall near Nottingham on the 14th and 15th March and it’s a great chance for suppliers to the fitness industry to meet with operators.

Business Development Manager Colin Scott said “our experience at Active Net last year was great, we met lots of fantastic operators who were keen to find out more about SWIMTAG, so we’re delighted to be heading back to showcase our latest developments in 2018."

“Most leisure operators have a rough idea of who we are and what we do, but not all have had a full demonstration, so they may not have realised how much SWIMTAG could benefit their pool. It’s a great opportunity to sit down with them one on one and show them the impact we’re having on participation and revenue generation at sites already using SWIMTAG."

“The product is always evolving as well, last year we had just launched our new lane displays, this year we’ll be showcasing the improvements we’ve made to the challenge feature which now allow us to set up Team Battles and Pool Battles, allowing pools to set up teams to compete against each other, at one pool or across multiple sites." 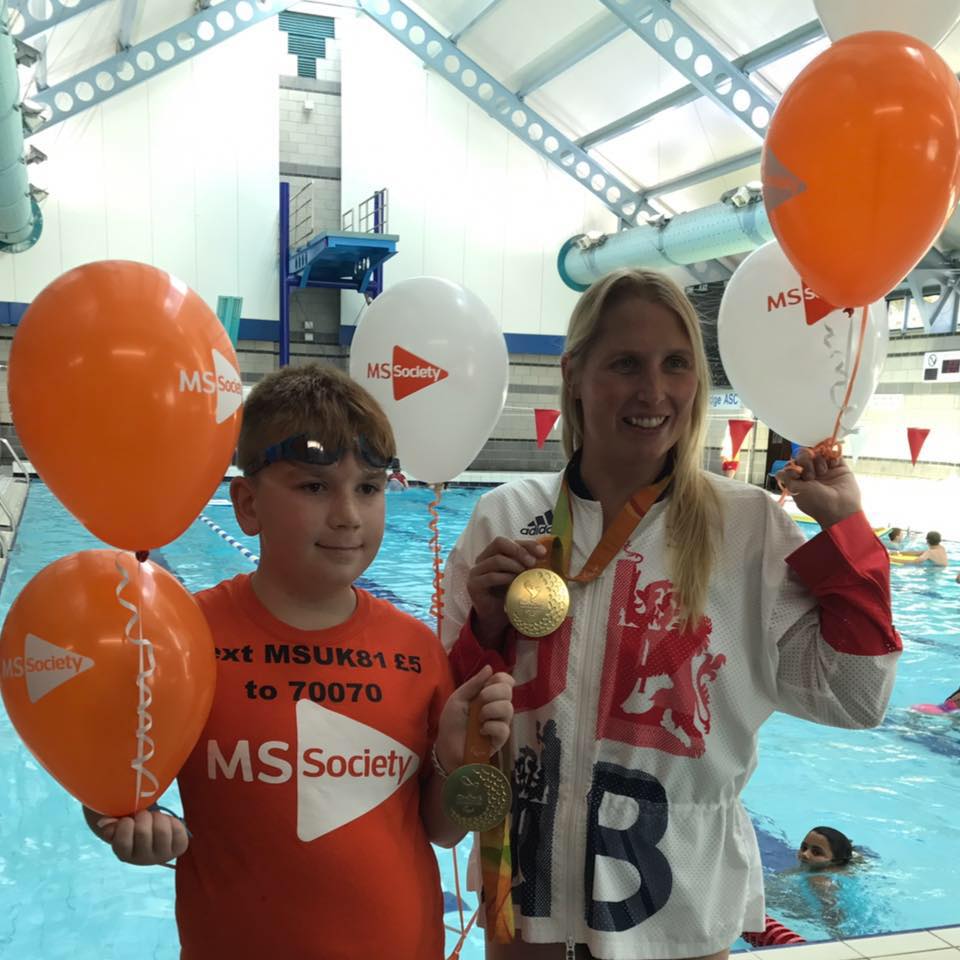 11 years old Ciaran Hanks is an inspiration. On Friday, December 8, Ciaran donned his googles, entered the water at the Melksham Blue Pool and completed an epic journey which has seen him swim 1454 lengths of the 25 metre pool, that’s 36.33 kilometres – a distance equivalent to the length of Loch Ness. As a result of his efforts, Ciaran has also raised more than £440.00 for the MS Society.

This is the second SWIMTAG challenge completed by Ciaran. His first adventure saw him swim the equivalent of the English Channel, this time raising funds for the Air Ambulance.

What makes this story even more incredible is that Ciaran is asthmatic, a condition which, until he began swimming lessons in January 2014, meant he found it difficult to control his breathing in a way that would allow him to complete even a single length of the 25 metre pool.

Ciaran says: “Three years ago I would never have thought it would be possible to achieve what I have achieved in the pool and I would like to thank everybody who has supported me both with my training and my fundraising.

“As well has helping to control my asthma through learning better breathing techniques, creating a challenge and setting a goal has really helped me to maintain my focus. Lane swimming can be boring but these challenges, along with the opportunity they create to raise funds for some very worthy causes, gives me a reason to keep getting in the water night after night.

I am now looking for my next challenge. This is not the last you have heard of me. I really hope my efforts inspire others to get in the water and set a challenge. If I can do it, others can too.”

Since setting up his SWIMTAG account in July 2016, Ciaran has clocked up more than 41 hours in the pool and swam more than 81 kilometres.

Ciaran finished his latest challenge in the Melksham Blue Pool but most of the journey took place took place in the pool at the Trowbridge Sports Centre. This facility installed SWIMTAG in November 2014 as part of an estate wide roll out by Places For People Leisure. Since then, more than 5163 swimmers have got involved in one or more of the many online challenges provide by SWIMTAG.

Esther Levin who is the Places For People Contract Swimming Development Manager for West Wiltshire, says: “Ciaran’s achievements are amazing and SWIMTAG has really helped to bring the challenge to life. Being able to track his progress and evidence his swims has been instrumental in maintaining motivation and encouraging support.

“Each month, more than 150 swimmers are now using SWIMTAG, at Trowbridge Sports Centre, and the system is totally integrated into our offering. The challenges bring a social element to swimming which, until now, has been a very solitary activity. This is helping to encourage our swimmers to maintain a healthy, active lifestyle.”

SWIMTAG is available, free of charge, to all swimmers at any pool managed by Places For People Leisure. All swimmers need to do is sign up for a free Places Membership.

To find out more about Ciaran and to donate visit his Just Giving page at: https:// www.justgiving.com/fundraising/LochNessAdventure.